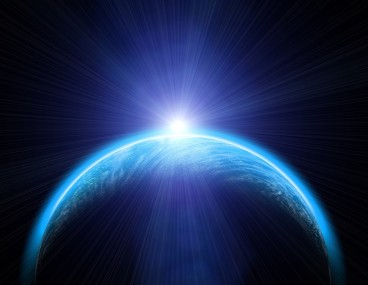 “In the beginning God created the heavens and the earth.”

The crowning glory of God’s creation was mankind.  While God describes all aspects of his creation as “good,” only the creation of mankind does he describe as “very good.”  In fact, Genesis 1:26 states that mankind was created in the very image (or likeness) of God.  The first two humans that God created were named Adam (literally “Man”) and Eve (“mother of all living”).  God placed Adam and Eve in a special area of his newly created Earth called the Garden of Eden.  The Garden of Eden–and the entire creation, for that matter–was perfect, a sort of utopia.  Adam and Eve spent time in God’s presence daily, walking and talking with him as one does with a close friend.  They experienced an unbroken, blissful relationship with God, just as God had intended and created them for.  There was no death, disease, or evil of any kind in the new creation.  Everything functioned properly, just as God had designed it and intended it.  Only one command was given to the couple: “You are free to eat from any tree in the garden; but you must not eat from the Tree of the Knowledge of Good and Evil, for when you eat of it you will surely die.”  Simple enough.  Besides, there were plenty of trees in the garden, and since this tree was in the center of the garden, they would have to pass by every other perfectly acceptable tree in order to disobey this request.

Meanwhile, in heaven a war was raging.  Satan, once a highly esteemed angel, had revolted against God out of pride and been cast down out of heaven.  Angry and bitter at his defeat, he resolved to strike back at God in the only way he knew how–to destroy God’s perfect creation.  In the form of a serpent, Lucifer (aka–“Satan”) came to the Garden of Eden and tempted Adam and Eve to break God’s only command.

When the woman saw that the fruit of the tree was good for food and pleasing to the eye, and also desirable for gaining wisdom, she took some and ate it. She also gave some to her husband, who was with her, and he ate it. Then the eyes of both of them were opened, and they realized they were naked; so they sewed fig leaves together and made coverings for themselves.  Then the man and his wife heard the sound of the LORD God as he was walking in the garden in the cool of the day, and they hid from the LORD God among the trees of the garden.

Of course, Adam and Eve’s attempt to hide from the all-knowing God of the universe were futile.  Fearing the judgment God had promised beforehand, Adam and Eve began pointing fingers.  “The man said, ‘The woman you put here with me—she gave me some fruit from the tree, and I ate it.’ ”  (Gen 3:12) “The woman said, ‘The serpent deceived me, and I ate.’ ”  (Gen 3:13)  But God was not fooled by this useless blame-game.  God pronounced judgment on the serpent as well as mankind, but was merciful in allowing the man and woman to live out their mortal lives before experiencing the promised judgment: death.  In the meantime, the woman would suffer pain and difficulties in childbearing (women, you can thank Eve for that!), while the man would suffer from endless toil, famine, and drought as he was now forced to plant and harvest food for himself in order to live.  Driven out of the Garden, Adam and Eve came face to face with “Paradise Lost.”

However, another much more serious kind of death entered the world in the Garden of Eden–spiritual death.  While they had experienced unbroken fellowship with God in the Garden, they were now separated from a sinless, holy God by an impassible chasm of sin.  Not only would they be unable to experience the blissful presence of God in their daily lives, furthermore, this meant that upon death they could not be reunited with God in their sinful state, thereby introducing sin into heaven.  In other words, without a method of absolving their sin, upon death they would be eternally separated from God and condemned to Hell, a place of eternal torment originally created for Satan and his demons.

“Why such a harsh judgment?” you may ask, “After all, it was just a piece of fruit!”  Not exactly.  In his temptation of Adam and Eve, Satan had promised that eating of the Tree of Knowledge of Good and Evil would make them wise, make them “like God.”  (see Gen 3:4-5)  You see, Adam and Eve’s sin was more than blatant disobedience against a holy, righteous God (which alone would merit an infinitely severe punishment!), it was an attempt (albeit futile and petty) to usurp God’s throne.  It was a coup d’état.  By their eating of the forbidden fruit, Adam and Eve had said to God: “You don’t deserve to be God, I do.”  Thus, the punishment is justly harsh.  The severity of the crime rises with the position of the one against whom it is committed.  Since God is infinitely righteous and powerful, such mutiny is worthy of infinitely severe punishment.

Mankind and the Earth were cursed.  Death had entered the world.  The utopia was destroyed.

But, through the judgment God administered on their sin, God also promised salvation and hope.  To the serpent, God said: “And I will put enmity between you and the woman, and between your offspring and hers; he will crush your head, and you will strike his heel.”  (Genesis 3:15)  God promised that one day the “seed” (aka–“offspring”) of the woman would “crush the head” of the “seed of the serpent,” which is simply a metaphorical way of saying that one day a descendant of Eve would conquer Satan and reverse the curses of the Fall.  But, in the process, this seed of the woman would suffer some sort of injury, a “bruised heel” as Genesis 3:15 puts it.  In other words, the seed of the woman would one day suffer a serious loss, but this loss would be unsubstantial compared to the crushing defeat that Satan and his followers would suffer.  Despite mankind’s sinful rebellion and disobedience, God, in his infinite mercy, had not given up on his creation.

Taking the Good News of Jesus "To the Ends of the Earth!"